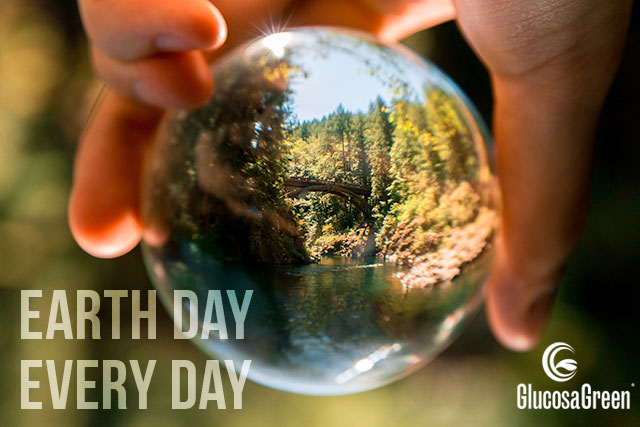 Today is the 51st annual Earth Day, and although it was first conceived in the United States to raise awareness about the long-term impacts of industrialization on the planet it gained international recognition beginning in 1990. Today Earth Day is recognized as the single largest secular observance in the world, mobilizing over 1 billion people into action in over 191 countries (1).

At TSI Group, we realize that change does not happen in a single day, no matter how large the observance. It is the work that companies and organizations do every day of the year that make a difference. We have been and continue to be focused on reducing our impact on the environment 365 days a year.

GlucosaGreen® is a perfect example. Our process for making this proprietary brand of glucosamine from non-GMO corn dramatically reduces the amount of wastewater and solid waste generated by traditional glucosamine extraction from shellfish, while producing the identical ingredient that people use every day to relieve joint pain for themselves and their pets.

In 2021 we aim to eliminate 170 million gallons of wastewater and 17 million pounds of solid waste. How? By converting users of shellfish-based glucosamine to GlucosaGreen®, one user at a time. And we won’t stop until every ounce of the over 6 billion liters and the over 75 billion kg of waste generated every year by shellfish-derived glucosamine are eliminated!

For every 1500 mg shellfish glucosamine tablet taken, 5 ½ times its weight in solid waste was generated and the wastewater discharged to produce it is 5 ½ times the glass of water taken with the tablet.

Today, April 22 we renew our commitment to sustainability and protecting the environment. But with GlucosaGreen®, every day is Earth Day.

Send a message to us